Bill Viola Jr. is a bestselling author, film producer, and “Sensei.”  He is creator of CommonSensei® life skills book series and Sensei Says® curriculum.  Viola Jr. is President of Kumite Classic Entertainment (1999) based in Pittsburgh, Pennsylvania which owns and operates Allegheny Shotokan Karate (1969).

Bill Viola Jr. is an award-winning journalist and blogger whose bylines include Black Belt Magazine,  Martial Arts Success, Sport Karate Magazine, Shotokan Magazine and Sport Karate Illustrated.  He is the senior writer for mmahistory.org.  He founded and established Kumite Quarterly magazine (2003-2007) where he served as publisher and managed distribution throughout North America.  In 2016, he co-authored Go Ask Your Dad, an inspirational book about fatherhood which debuted on the Amazon best-sellers list.

He authored the award-winning and critically acclaimed Godfathers of MMA (2014) that peaked at #1 on the Amazon charts in the individual sports category with its commemorative re-release (2017).  The book which as based on his father’s life and inspired the SHOWTIME documentary film, Tough Guys (2017).  Viola co-produced the project which attracted a star studded lineup of executive producers from MinusL productions including Academy Award® Nominated Morgan Spurlock (Supersize Me) and Oscar® winning writer Ross Kaufmann (Born in Brothels).   Viola a made a cameo playing his father.  He is currently developing the screenplay for a major motion picture adaptation of  Tough Guys.  He has been contracted as an independent consultant for major motion pictures including Warrior (2011) with his good friend Jimmy Cvetic and has credits as a associate producer, producer, and executive producer for films such as Tapped Out (2014), Gridlocked (2015), The Sound (2017).

In 2016 Bill Viola Jr. was awarded a Federal Trademark for the Sensei Says ® life skills curriculum.  The critically acclaimed education program is used exclusively in his martial arts and self-help courses.

In 2020, he released the first in a series of CommonSensei books.  Each edition readers can earn different colored ranks in a quest to become a “Black Belt in Life”™

His company’s signature event, the self-titled “Kumite Classic,” is regarded as the most significant karate event in Pittsburgh widely called the mecca for martial arts in the region .  KCE also produced the annual Pittsburgh Fitness Expo, recognized as the largest and most established multi-sport convention in Western Pennsylvania attracting sports and entertainment icons such as Kurt Angle, Lynn Swann, Franco Harris, Antonio Brown, Ice-T, and Royce Gracie over the years. Viola has served as a consultant, referee, and event coordinator for some of the largest martial arts events in the world. In 2017 he brokered a partnership with Century Martial Arts and WAKO to produce the North American Open in Las Vegas, Nevada in conjunction with UFC Fight Week.

Viola experienced the “Golden Era” of MMA firsthand as his father, Bill Sr., is credited as the co-creator of the sport (a decade before the UFC) by the Heinz History Center, in conjunction with the Smithsonian Institute.  In 2011, Viola’s research and documentation of martial arts was honored with a permanent exhibit installed at the Western PA Sports Museum and Senator John Heinz History Center.  The display is adjacent to the Franco Harris “Immaculate Reception.” Jr. and Sr. are both official Sport Karate History Generals and recipients of the Sport Karate Museum’s “Lifetime Achievement” award.  The duo was awarded the Champion Associations Willie Stargell M.V.P. Award (2011) for community service, a tribute that includes Michael Jordan and Muhamad Ali as alum. In 2017 Viola Jr. was showcased in the book, Who’s Who in the Martial Arts – Legends of American Karate.

Viola’s dojo is home to the only karate athlete’s honored with the “Positive Athlete” award and featured on KDKA’s Hines Ward Show.  In 2016 his work was honored by Pittsburgh Magazine who named him to the prestigious “40 under 40” list recognizing influential young leaders in the city.

In 2020 Viola Jr. was inducted into “Who’s Who Legends” Hall of Fame and was featured in the Chuck Norris edition 2020 Martial Arts Masters and Pioneers book. 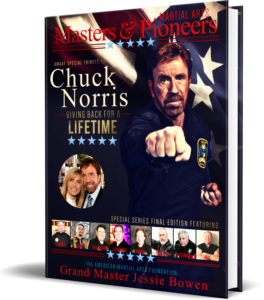 Viola Jr. began his karate career as a toddler.  It’s often joked, “He was kicking before he could walk.”  He followed in his father’s footsteps, literally,  who was already a legendary karate Sensei in Pittsburgh as the co-founder of the sport of MMA, and President of Allegheny Shotokan Karate (1969). He was one of the most consistent sport karate competitors in the Unite States recognized as a multi-time United States of America Karate Federation (USAKF) National Champion and All-American Athlete.  He was the most successful Pennsylvania State Karate Champion of the era. As a Junior at the University of Pittsburgh, he was recognized by Arnold Schwarzenegger as a World Champion at The Arnold Sports Festival, Columbus, Ohio in 1998.  In 1999, he sustained a cervical neck injury in an automobile accident followed by surgery on his esophagus that ended his competitive aspirations.

Viola is the “Sensei” of Allegheny Shotokan Karate, the gold standard for martial arts in Western PA (celebrating its 50-year anniversary in 2019).  The family-owned and operated dojo is blessed with 3 generations of Violas who carry on the legacy.  Over the past fifty years, Viola’s karate school has welcomed and transformed everyone from children struggling with autism to Olympic level competitors.  “It doesn’t matter if they are a professional athlete or a teenager who is coping with bullies,” Viola Jr. says,   “Each and every student is on their own personal journey of self-enlightenment and courage. Our goal is to help them reach their potential and go beyond.”  This formula of empowerment inspired Viola Jr. to package the family secrets into an Award-winning curriculum—Sensei Says®. This life skills education course is the cornerstone of Allegheny Shotokan’s sister programs Norwin Ninjas (4-7 year olds) and Nursery Ninjas (2-3 year olds).  The growing Pittsburgh karate legacy includes all four of his sisters and now his daughter, Gabriella Capri Viola (2018 US Open International Champion) and a son, William Viola IV born 2017.  On September 23rd 2019 (William Viola IV’s birthday) The City of Pittsburgh celebrated “Sensei Viola Day” to recognized the schools 50th anniversary.

Bill is the head coach of “Team Kumite,” an all-star travel team that represents Pittsburgh on an international level. Most recently his protégé Xander Eddy won the Pan American Championships in Cancun, Mexico.  Eddy became the youngest American in history to win Gold and was honored by the Pennsylvania Governor Tom Wolf and WTAE featured athlete.   The team is slated to visit Tokyo, Japan in the Summer of 2021 for the Olympic Games.

Viola has been involved with charitable work since he was a student at the University of  Pittsburgh when he established Kumite International (KI), a scholarship foundation (the first of its kind in the United States) through a partnership with Western PA Police Athletic League and Eckert Seamans Law Firm. KI allocated $50,000 in scholarship funds for karate athletes and made national news when Lynn Swann (The Chairman of President George W. Bush’s Council of Physical Fitness and Sports) presented the scholarships with Viola Jr. at his 2004 Kumite Classic. He has raised tens of thousands of dollars for research for Muscular Dystrophy and Parkinson’s Disease. Currently, Viola has made it his mission to KICK Parkinson’s disease—literally.  After he lost his Grandmother to complications from the disease, he created a mobile 1-mile “kick-a-thon” in conjunction with the former State Senator Sean Logan’s PIND (Pittsburgh Institute for Neurodegenerative Diseases) 5K.  In all, over the past three years, the PIND 5K event has raised over $1 million dollars through appropriations, grants and sponsors — 100% of the funds are earmarked for experimental testing and research in hopes of finding a breakthrough in Pittsburgh.

In 2018 Viola’s daughter Gabby was diagnosed with Indeterminate bowel disease, an incurable inflammatory form of colitis 😥.  In 2020 the two became advocates for the Crohn’s & Colitis Foundation.  They joined the national effort to raise awareness for the disease. Today they lobby for a cure by meeting with legislators, congressman, and senators to help fund research and improve healthcare.

Viola Jr. was named Author of the Month by Elite Publications: 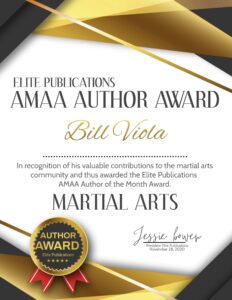 His latest project, CommonSensei, is a self-help (HOW TO) book series aimed at teaching life skills. 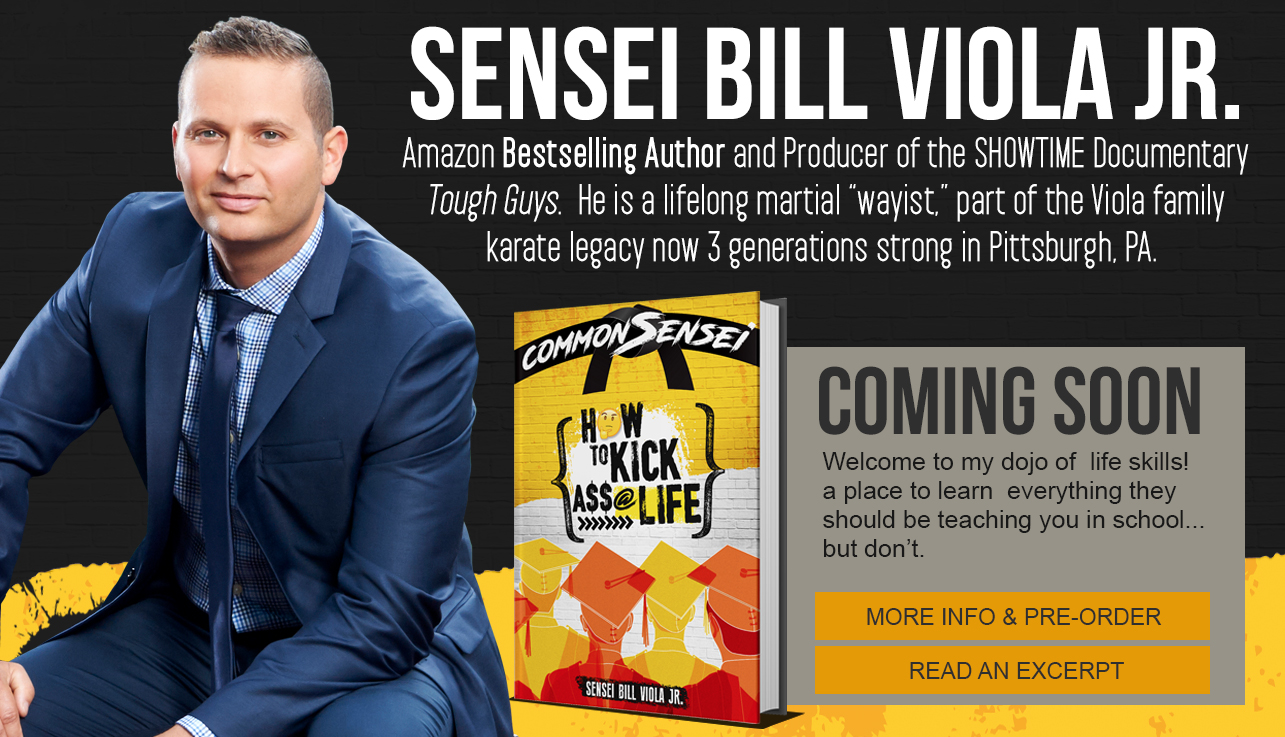 “H🤔W TO EARN A BLACK BELT IN LIFE”

For more information about Bill Viola Jr. check out:

Let's get in touch